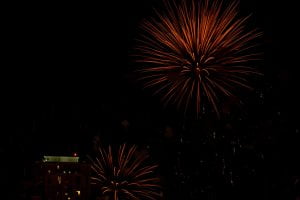 The last post touched on the power of anticipation; how it helps a lot to know what’s coming. But, one can’t always know! And even when we do, it’s can be really hard to get it perfectly right at once. Quite often, we have to ‘fuss about’ a bit until it’s right. So, today, I introduce the idea of insistence.

Let me tell you the story of this picture….

Everyone knows how immensely beautiful Fireworks are. They light up the night sky in such a dramatic way. It’s all just very captivating; the sounds, the flashing, the colours. And, of course, New Year is always a perfect ‘excuse’ for fireworks displays. I wanted to catch some of the action – but I had to be at an indoor venue at the exact same time. So, I set the camera up on a tripod and the neighbour was to fire a remote trigger for me. Sadly, that beautiful plan didn’t end well.

Dear neighbour had to step out before the fireworks started and failed to take any pictures. Crap can happen – despite best efforts at anticipation. As luck would have it, though, I discovered there was to be another session about a week from that. (Since I’m not yet rich enough to stage my own fireworks show :S )

The point here is simple: no matter how much you anticipate, an iconic moment might still slip past. And, if it’s really critical to the overall story, there’s absolutely no harm in ‘staging it’. It may (initially) come across as making a fuss – but it works! One time, the couple I was photographing just went into a totally off-script ‘kissing frenzy’. Truly beautiful moment – except they had stepped out of the lit zone. When they were done, I simply said “*coughs* Ahem, that was really great. Can we try it again in the light?”

Another time, I mixed up schedules and arrived after a guest artiste had performed. I was thoroughly disappointed in myself. But, (again, as luck would have it), the artiste got back on stage after the service for a totally unscripted close. That was my moment! It was like some ‘unseen hand’ re-staging the moments I missed (would have been impossible to get her back on stage by myself). Even she couldn’t tell the pictures were from the ‘other’ session.

Wherever possible, seek to re-create any critical moments you miss during a shoot. It works wonders. Of course, you can’t ‘gatecrash’ an event and expect to wield such powers.

Quick Tip: Courtesy goes a long way on the set. Amazing what you can get people to do by (being in control) and asking nicely 😉 !