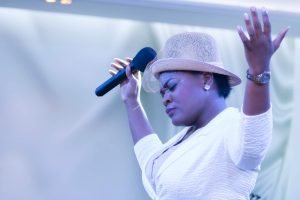 [From the Home Directory]

Though I comfortably straddle a few genres today, I’m always happy to declare that (photographing) music was my early love. That’s was where I ‘cut my teeth‘ in photography. I used to have to cover (portions of) the stage at concerts in the early days; almost like being part of the performance itself. The adrenaline was next to nothing else; such a rush! It was the kind of thing you either loved and craved in excess or really couldn’t live with. Always the former for me.

Looking back now, the allure of music photography is just as strong (if not stronger) as it was in the early days – even though I no longer do as much of it. I still wake up some mornings with a burning desire to photograph music. The picture above is a product of one of those mornings.

I had shot this venue more times than I could count. It was place I knew like the back of my hands. Everything about the hall screamed ‘prime’ – and the 35mm was my tried and tested choice. It could focus fast enough, stop down low enough and it afforded me just about the focal length required to focus while squeezing between rows in the hall. With it, I could get close enough to stage without being a nuisance to the video guys. Not the widest of views by any count – but that was a fair compromise to make.

That morning, though, I woke with an entirely different idea in my head. No idea who the lead singer was going to be – but I wanted to catch them differently than I had ever done. I wanted to go in really close, detach them from all the ‘noise’ and catch an absolutely inspired expression that bore its own message. So, against the ‘laws of the book’, I reached for the telephoto lens [55-300mm]. It was always going to be a nightmare shooting a telephoto that close to the stage. Even worse, it might end up being useless for the rest of the hall – but I went there for this one shot above anything else. I’ll let you decide if it was worth it 😉

It wasn’t by the book – but no one ever did anything truly outstanding by the book. Great results often come from colouring outside the lines. So, just like music, this shot was about just going for it and expressing an inner itch. Art is simply a portal for the expression of self. Don’t let the rule box you in.

Quick Tip: Sometimes, ditch the rules and just express yourself.