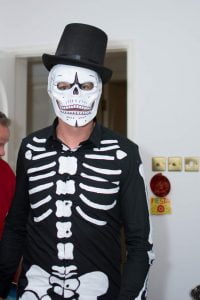 When two elephants fight, the grass suffers. In the  world of angels and demons, we as humans are grass. Fair game.

The other night, I was up in a dark room shooting what I had been told was a ‘birthday party’. Turns out it was actually a costume birthday party. Here’s one of those rare cases where the including a single word can make all the difference.

I take my cue from legendary basketballer, Vince Carter, when he said ‘you can’t defend what you can’t comprehend‘. In truth, you can’t photograph what you’re not into. It’s not just the edges; it’s the fine print, gloss and feelers all together. You can’t just stand aloof and click away; you have to get stuck in. You want to seem like a part of the party so everyone can be warm and alive around you. So, if they’re wearing a costume, you respect the terrain, don yours as well and look pretty in it.

But, of course, I only knew it was a costume party AFTER arriving. Celebrant provided a mask at the venue – but that meant  there was absolutely no time to get familiar before shooting. Mighty awkward – but the clock was ticking. Turns out the masks’s awkwardness was the very least of my worries on the night. Bigger problems stemmed from the lighting.

Save for a few (really really dim) candles and some reflection off the DJ’s console, the entire room was pitch black ( You’re probably looking at the picture and wondering if there’s any truth in this statement – but that’s precisely the point of this post: the lighting and focusing under impossible situations). It helps to pack the right gear. And subject lighting was been made possible by using a single camera-mounted flash, modified with dome diffuser. Notice how it easily got around the aggressive glaring and shadowing from pointing the flash directly? Also notice how it’s able to illuminate a complete sphere (vs bouncing off the ceiling unmodified)? [Maybe we can talk about lighting and modifiers sometime?]. Asides the ever-present risk of under- or over-exposure, subject lighting was quite easily resolved. The real pain was in identifying my subject through the viewfinder.

In the most basic colour distribution mode, all you have is white and black – angels and demons, 1’s and 0’s. Whatever is not a zero is a one and whatever isn’t quite a one is a zero. That’s how the camera ‘sees’. When everything is all black (or all white), the camera’s auto-focus mechanism can’t quite make out the intended point of interest. So, focusing becomes impossible (at worst) or terribly difficult (at best). That’s when you absolutely need an angel to save the day.

The quick way out would be to select a sufficiently contrasted point (singe-point focus mode) within the intended frame as the camera’s focus. That little bit of contrast is all the camera needs to focus and fire. Otherwise, the camera simply won’t fire no matter how hard you press the shutter button.

Shooting in a dark room can be a real chore. Even worse is doing it behind an alien mask – but you’ll find it significantly easier if you play the ‘angels and demons’ game and seek out areas of contrast as focus points.